On Comparing Yourself to Others 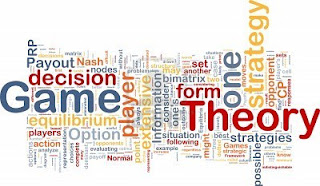 N.B. This post is a one that I have written in some form at least twice before, but it is one that I re-read myself often when I need the reminder, so I figured it was time for a refresher.

Every mother knows what it’s like to look at another mother, compare herself internally, and come up wanting. Every woman has at least one friend who always has a clean house, never yells at her son, and always looks immaculate. That reality is just not the same for everyone, though. When I fall into the trap of comparing myself with other mothers, I go back to my political science training. Sound odd? It actually makes perfect sense!

Game theory is a kind of analysis used by social scientists and economists to predict outcomes. Behavior is a key component of game theory analysis, as are preferences. Each person is a composition of all her preferences. One unbreakable law of game theory states that it is impossible to make interpersonal comparisons of utility. What does that mean in plain English? Each person values different things and at different levels. An example should further illuminate this idea. “Jane” places a great deal of value on having a clean house, clean children, and clean clothes. Naturally, she will direct her efforts to this end. “Nicole” greatly values creative expression (both hers and her children’s) and her home-based business; she prioritizes housework behind just about everything else in her life.

Would it make any sense for Nicole to compare herself with Jane? She might look at Jane’s orderly and clean existence and have a pang of envy, but is she willing to change her preferences and values in order to achieve Jane’s ends? Likely not. Jane, on the other hand, may be slightly in awe of the never-ending output of Nicole’s painting, sculpting, Lego-ing sons, but may not be willing to endure what such creativity does to her house, given the fact that she values cleanliness. Although each woman may, at times, feel that she is doing something wrong, if she hearkens back to who she is and what she values, she should realize that there really is no comparison to be made. Some women insist that their children clean their rooms before they leave the house or do anything else. These women likely set that example for their children. Some women are always willing to drop their own housework in order to play with or read to their children – or themselves!

Neither of these women is “right.” Rather, each is living her life according to her own unique preference orderings. There is no universal set of rankings which can be enforced on all women, because women – and their families - are all so different. Comparing oneself can be a useful exercise if one is not living according to her own preferences – if she is not running her house, her family, or herself according to what brings her the most utility (think happiness). In that case, it makes sense to look around and see what else is out there. If, on the other hand, a woman knows what she values and has some idea of how that translates into running her household, then comparisons become completely meaningless. So Jane has a clean house? Nicole is not willing to put the brakes on her kids’ creativity in any way, negating the possibility of having the kind of house Jane does. So Nicole’s children are artistically prolific? Jane is not willing to have her children grow up in mess and chaos for the sake of their art. She believes that an orderly house leads to an orderly mind. Neither woman is right, and both are right! Game theory is a fascinating study in its own right, but it’s amazing how many of its principles are both derived from and can enlighten real life. Considering the question of comparisons scientifically can be an incredibly useful way to banish them from your thoughts forever!

Oh, and that idea about not being able to make interpersonal comparisons of utility? That is a really helpful thing to share with your kids because, really, you can't make interpersonal comparisons of a lot of things - pain is one that comes to mind. Kids have a hard time understanding that what doesn't hurt one of them a whole heck of a lot may be positively punishing to another one. Pain feels different to different people. When Therese (now 15) got her braces, she didn't complain at all. When Mary-Catherine (12) got hers last week, the whole world knew that she was hurting for daaaaayyyys. Different kids. Therese has had so much pain for so long that braces were a mere blip on her radar. Similarly, when I was in labor for 23 hours with Therese and the nurse wanted me to rate my pain, I really had to think about it. I'd rather be in labor than have some of my migraines (hey - at least you get a baby out of the deal!). Every single nurse (I was the only one laboring at the moment) kept telling me it was okay to make noise. I was like 1st - I'm a lady. 2nd - it could be so much worse. (always remember - it can always be so much worse!). So, no comparisons of interpersonal utility. Go blow someone's mind.
By Laura Delgado at January 31, 2017 No comments: 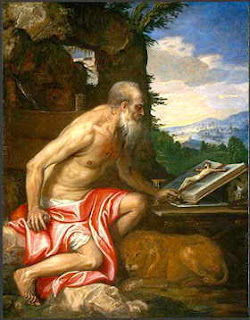 I've taken my time about choosing my patron for this year. I usually use the saint name generator to choose a patron for a new year, but I have often had trouble connecting with that choice (although when I just did it, it gave me St. Monica, so I'll definitely add her to my Board of Directors - stellar choice. God seems to be (metaphorically) yelling at me right now). This year I decided to let God choose for me, and I had no trouble discerning his message. Due to events of recent unfolding (oh, heck - let's be honest - due to the course of my entire life since I began to talk), I knew that St. Jerome would be my CEO this year. I strongly, strongly, strongly encourage you to read his bio linked above if you're not familiar with this awesome saint, but here is just one highlight (I had others, but decided to delete them. It is well worth a read, though. Like the saints who resonate most with me and, I think, with many people, Jerome was very human with very recognizable foibles that originated from very good intentions):

"...knowing that his true vocation was to be a monk and a recluse."

If you're not in the habit of choosing a saint to pray for you over the course of a given year, I highly recommend it! You don't have to be Catholic to engage in this practice. Just as you ask your friends on Earth to pray for you, asking our friends in Heaven to pray for us is no different! Find a saint who struggled with the same faults and temptations you have, or who walked the same walk, or who you would love to emulate, and ask for their intercession. You'll be amazed at the graces and blessings you'll come to experience over the course of the year.

My new obsession is browsing this website, which archives entire series of magazines and journals. I have long loved magazines like Lippincott's and Munseys, but there are so, so many good things here. My latest find is The Sacred Heart Review, a church bulletin from the late 19th century (Boston and Cambridge) that had a nationwide distribution. It's amazing. It epitomizes what a church bulletin should be - it incorporates catechism lessons, saint's biographies, and so, so much more. Here is just a tiny snippet from the eight-page broadsheet style first issue. I'm ecstatic that I have almost 1,600 more issues to read!

The Sacrifices No One Sees

So many times we make sacrifices that don't look like sacrifices, right? Because what is a sacrifice for one person isn't for someone else. This is one of those subject areas where you really can't judge someone on the outside looking in because you have no idea what someone else is feeling or experiencing. Also, don't forget that some people are very good at faking it (even if they never quite make it!). They don't have to look like they are suffering (or talk about it, heaven forfend!) for it to be true. So give someone a break today, and don't be so quick to judge them. It is so, so true that we have no idea what other people are enduring on a daily basis, nor do we know how close to the breaking point they are. Like I always tell my kids (not that they heed me), extend grace.
By Laura Delgado at January 04, 2017 No comments: