Sewing was just one of those things that I assumed I would be able to do when I grew up (that and fixing hair well). As it turns out, you really do need someone to teach you how to sew! Fortunately for Therese (12), there is Rosie and Rosie's Doll Clothes Patterns! For the past two months, Therese has been honing her nascent sewing skills with the amazing Learn How to Make Doll Clothes Video Course with 8 Free Doll Clothes Patterns.

What This Course Is

Purchase of the course for $47.44 (the seemingly odd price is because the course is priced in Australian dollars, so this is a currency conversion!) entitles you to 12 months of online access to over 130 instructional videos and eight free bonus patterns. Although you can still greatly benefit from this course if you have sewing experience, the course assumes that you are starting from zero, so you have nothing to fear if you have never touched a pattern before! The videos are great for kids 8 and up, but kids even younger could benefit from them if they had someone to help them with things like scissors and pinning.

The course is divided into six weeks of tutorials, beginning with the most basic topics including the tools you'll need, how to set up your sewing room, and selecting fabric. Week 2 addresses things relating to working with patterns. Rosie really does walk you through everything step-by-step. It's a huge confidence builder! The patterns are pdf files that come in two parts - instructions and the patterns themselves. Therese has been raving about the patterns. Her grandmother gave her a stash of patterns for 18 inch doll clothes awhile back, but after she has been able to use Rosie's very clear and easy patters that print on *regular paper*, I don't think she'll ever want to go back to patterns that she has to cut out on onionskin paper again.

The great thing about the videos is that it's almost like there are two sets: the standard "how-tos" and the "cool tips." So you'll learn all about how to cut pattern and fabric, but then you'll learn cool tips for the same. I love that! It's what sets Rosie apart from other lessons you can find elsewhere. Yes, you can learn to sew other places, but you don't get "the inside scoop." You also don't get the adorable patterns that look so much more complicated than they are. Finally, you don't get a money-back guarantee.

But Rosie is actually the best advertising for Rosie's Doll Clothes Patterns:

How We Used It

Therese has a little sewing experience (a very little), but no sewing confidence, so I loved that Rosie started at the beginning! That gave Therese confidence because she knew what Rosie was talking about! Rather than doing some sewing every day (because the reality is that we don't have a sewing or craft room and it *does* take time to get supplies together and the sewing machine out), Therese tended to sit down and work once a week. She wanted to work by herself, so she watched the lessons on my laptop with her sewing machine in front of her.

I kind of assumed that she would be working at the schoolroom table, but the allure of the huge island in the kitchen turned out to be too much temptation for her! 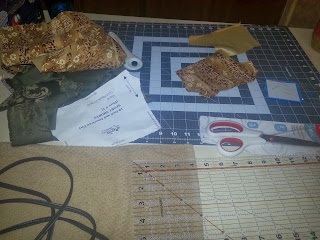 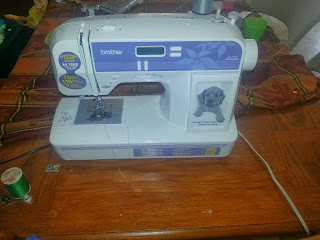 This shot is as much as I am going to show of Therese's work, because she realized very early on that these adorable doll clothes would make perfect Christmas presents! Hence, look for this post to be updated in about 8 weeks after the recipients have opened their dolls' outfits :-) 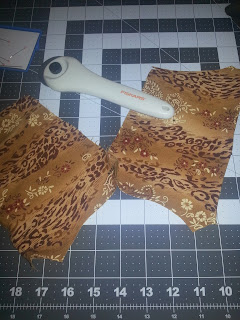 How We Liked It

Therese has been having the *best* time with Rosie's Doll Clothes. As I said, the ease with which she can work with the patterns, coupled with the complete instructions, has put this program heads and shoulders above any other sewing option. The added benefit of the end result being *doll clothes* is the icing on the cake. Therese is not really much of a doll person (although she has the obligatory American Girl doll, courtesy of her grandmother), but she does love fabric, so the idea of being able to make clothes for her doll (and for other people's) grabbed her from the start.

It did not surprise me that Mary-Catherine is begging to learn how to sew, too. What has surprised me is that Michael wants to learn. I guess it shouldn't surprise me, though, given that Henry is a far more accomplished sewer than I. I will definitely let both twins have a crack at learning!

For the price, this program is a no-brainer. Try it - you simply won't regret it! To see what other Crew members thought, click the banner below.