Supercharged Science is one of those programs that homeschoolers dream about. In fact, they drool over it. Or maybe that's just me...Created and run by Aurora Lipper, a bona fide rocket scientist and my vote for "teacher most likely to make kids who hate science love science," Aurora's e-Science Learning Program renders moot all other homeschool science options. Yeah - it's that good. And Aurora herself tells homeschool parents specifically why Supercharged Science is a great option for homeschoolers in her letter to parents comparing e-Science with other homeschool science programs. 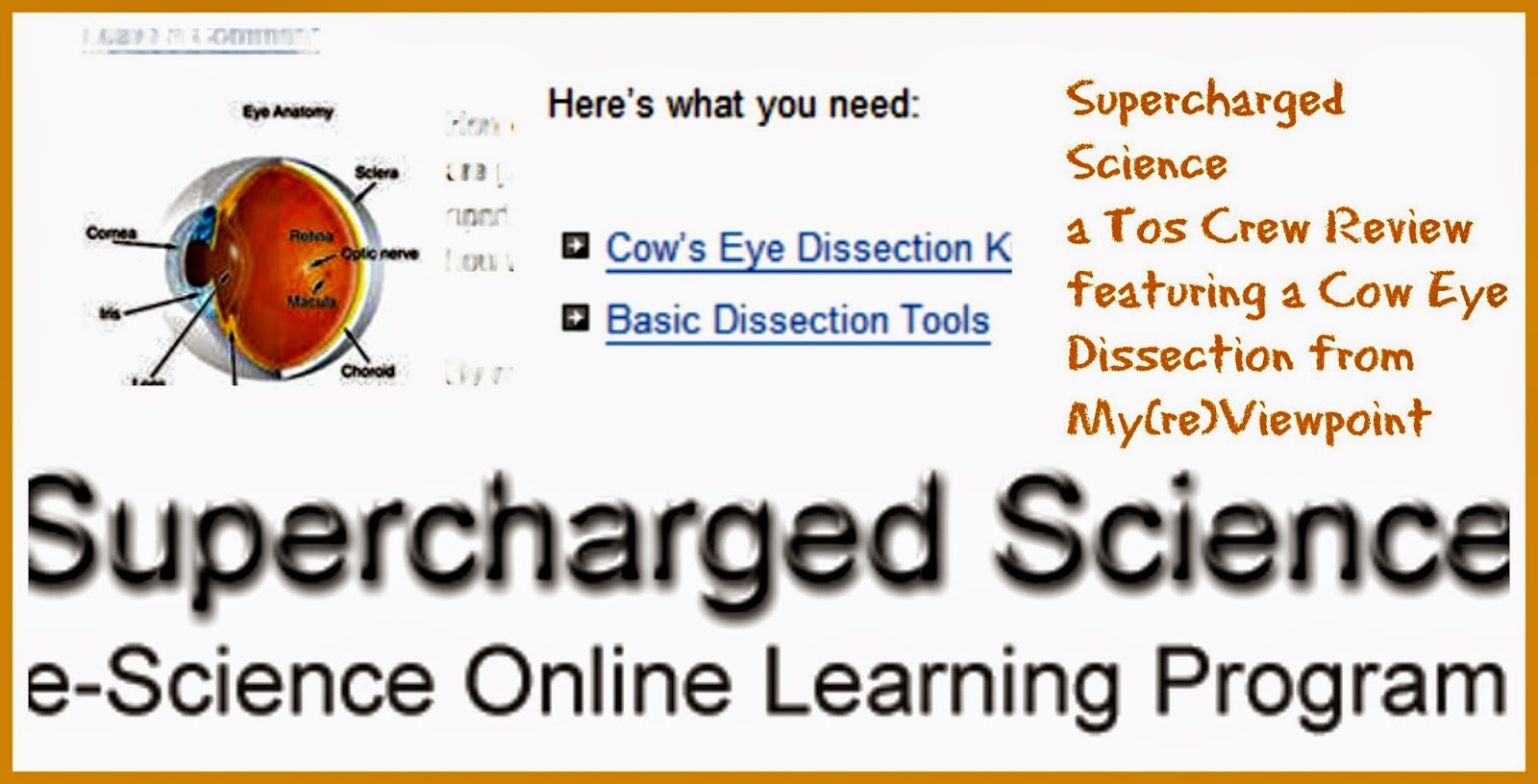 I'm going to start by saying that I was lucky/fortunate/blessed enough to be able to review this program last year. You can read my first review of the e-Science Premium Membership here. Last year, Therese focused on Chemistry when we reviewed e-Science. This year, we thought it only fair to focus on Biology! More on that later, though! First, the all-important question for the uninitiated: what is e-Science?

Aurora Lipper has put together a science program that defies explanation. She describes it as a completely hands-on science program for homeschoolers that is completely kid friendly. Even better, Aurora has designed e-Science so that kids can learn a TON about science without ever reading a word in a textbook. If that idea makes you quake, though, because you think kids *need* to read the wheres and whyfors of the science in addition to doing hands-on experiments - fear not! Aurora has you covered there, too. There is plenty of reading to do in conjunction with all of her awesome experiments. It really is up to you how you use her program. Suffice it to say, though, that there is enough in this science curriculum to last your entire family for years. Yep - years.

At first, you might be overwhelmed just diving into e-Science, even though Aurora advocates this approach. For advice on how to get the most out of the program, you can't do better than letting Aurora tell you what to do:

Even better, there is a feature on the site that I'm pretty sure wasn't there last year (a couple of my fellow Crew mates seem to agree with me) - a short, graphic intense user guide. If you can't figure out what to do just by noodling around the site (and trust me - you will eventually figure out what to do - it's pretty intuitive and you really can't go wrong!), or you're one of  those homeschooling families that likes to go into things with a plan in place, be sure to start with the user guide.

Another awesome feature that was not on the site last year is a grade level map! By clicking on the grade level, you will be taken to an appropriate list of topics (many of the topics overlap). 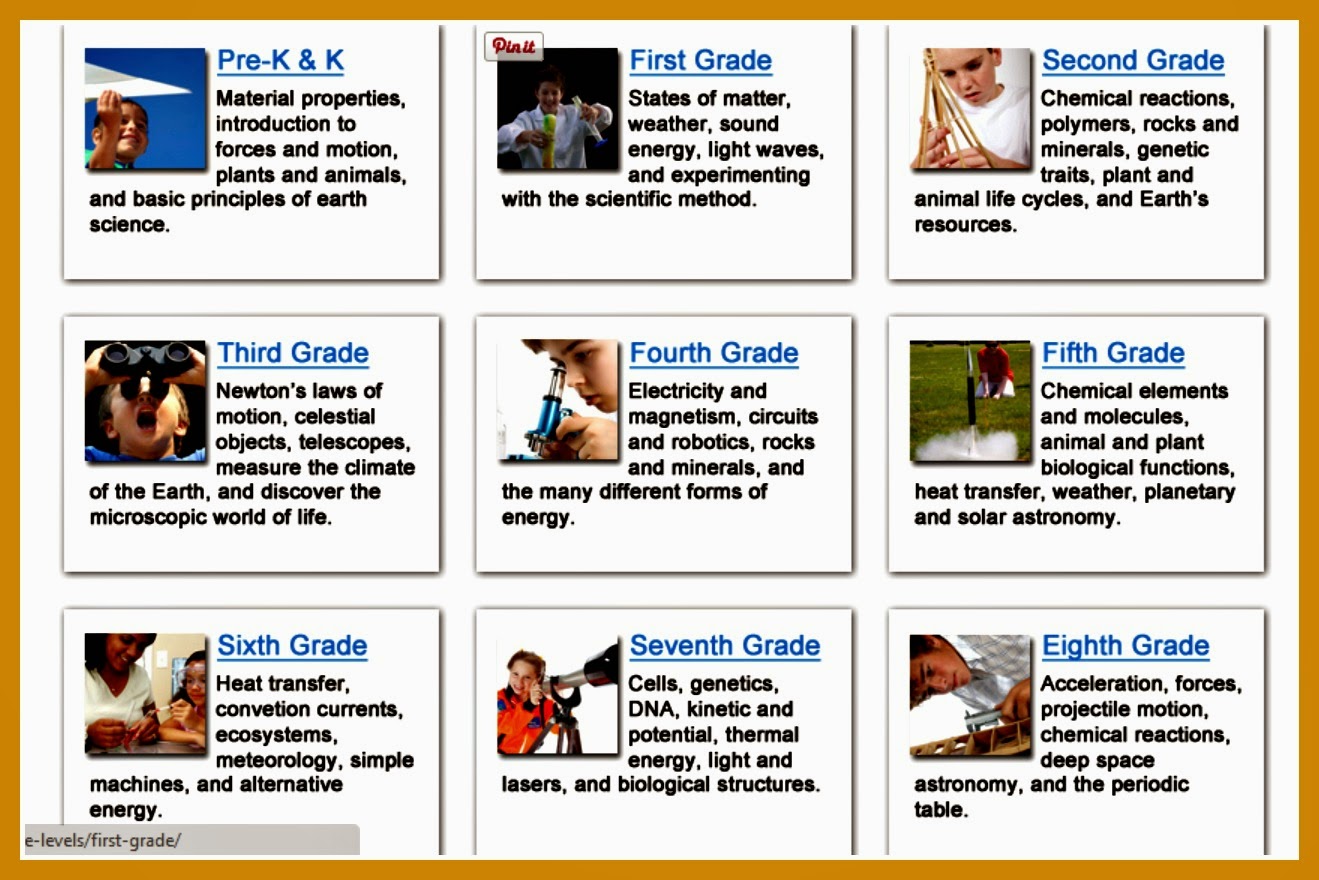 If you prefer the topical approach, rather than the grade level, then this menu is for you: 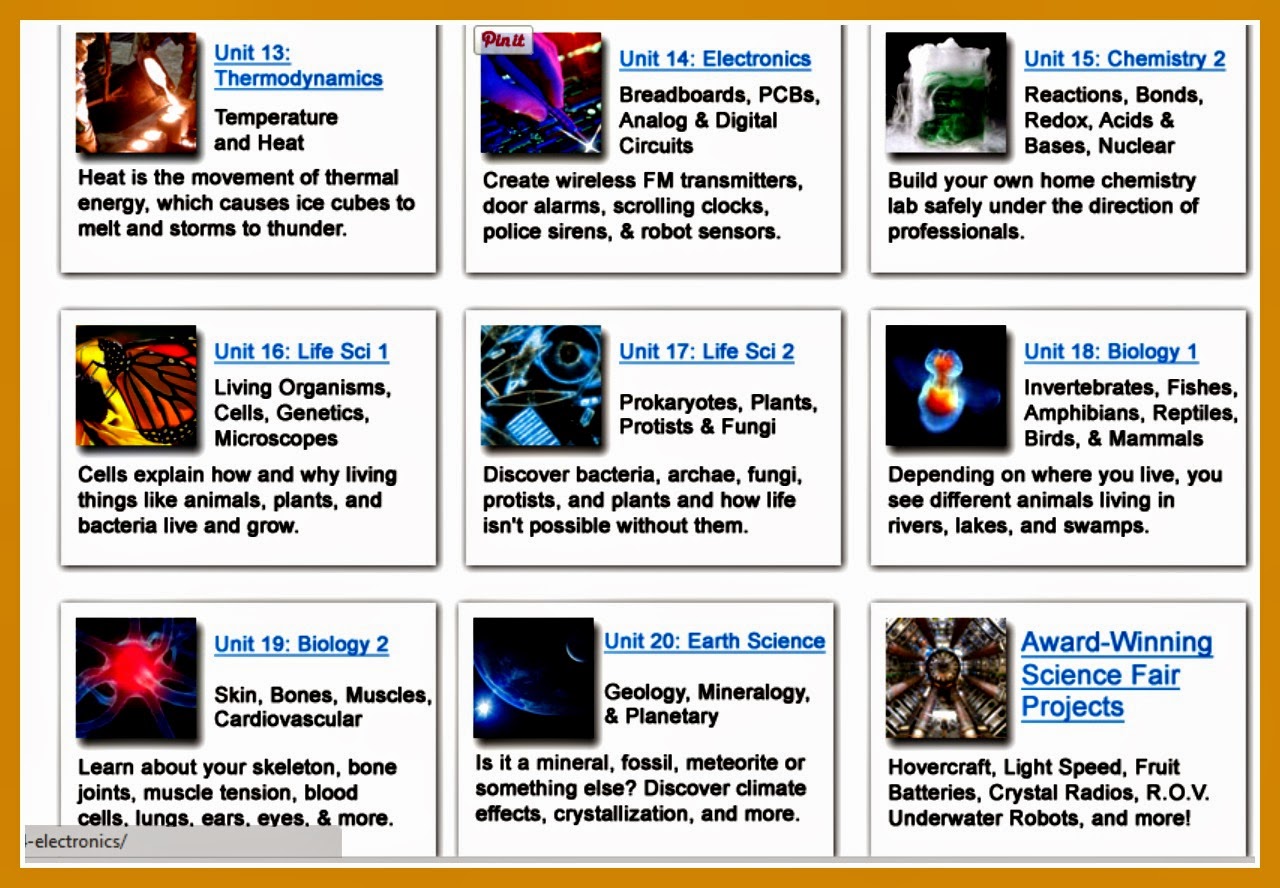 Each of Aurora's units follows a similar format, as outlined in the aforementioned user guide. There is an introductory video, some background reading and discussion of the topic, and a slew of amazing experiments. How much of which you choose to do is a completely individual decision.

Like last year, I was most interested in the high school offerings of Supercharged Science. In the past, we have spent lots of time on the elementary topics and my kids have had a blast doing tons of the experiments (plasma grape, anyone?). On this go-round with Supercharged Science, that didn't change. We studied Unit 16 - Living Organisms. Some of what the kids did (like classifying objects) was a little repetitive, but that's fine. I reminded them that if they were in public school, they would be doing a chapter on living organisms in science every single year. Plus, they really do love Aurora's enthusiasm, so they didn't mind. Also, I wanted them to work on this unit in order to lead up to the capstone project in our study: the Cow Eye Dissection.

Because the kids were all studying Biology, and because Therese needed to do a dissection (a high school Biology mainstay, after all), we decided to do Aurora's Cow Eye Dissection: 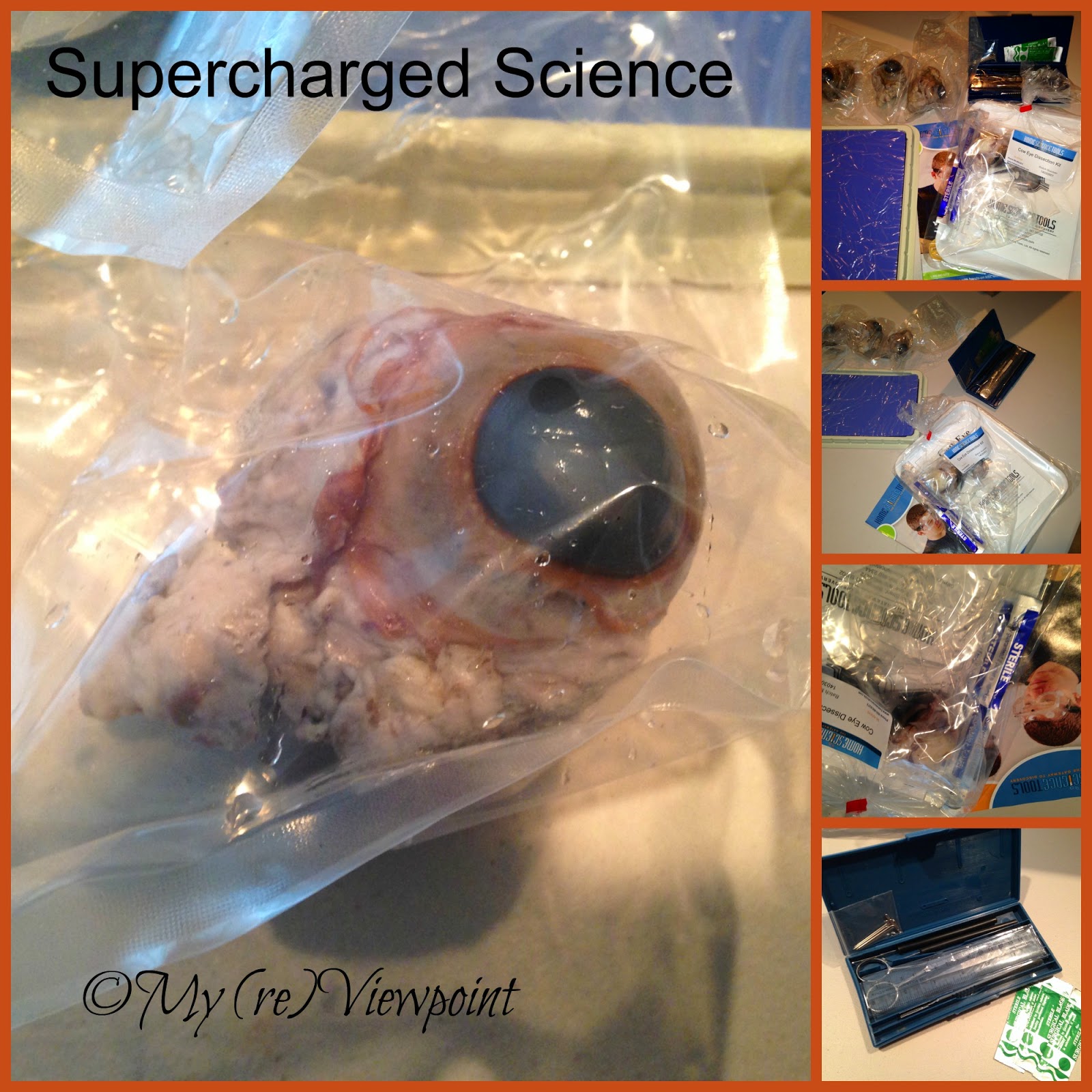 I am not shy about admitting that I don't like dissections, never have, never will. However, I happen to be blessed enough to be married to this guy: 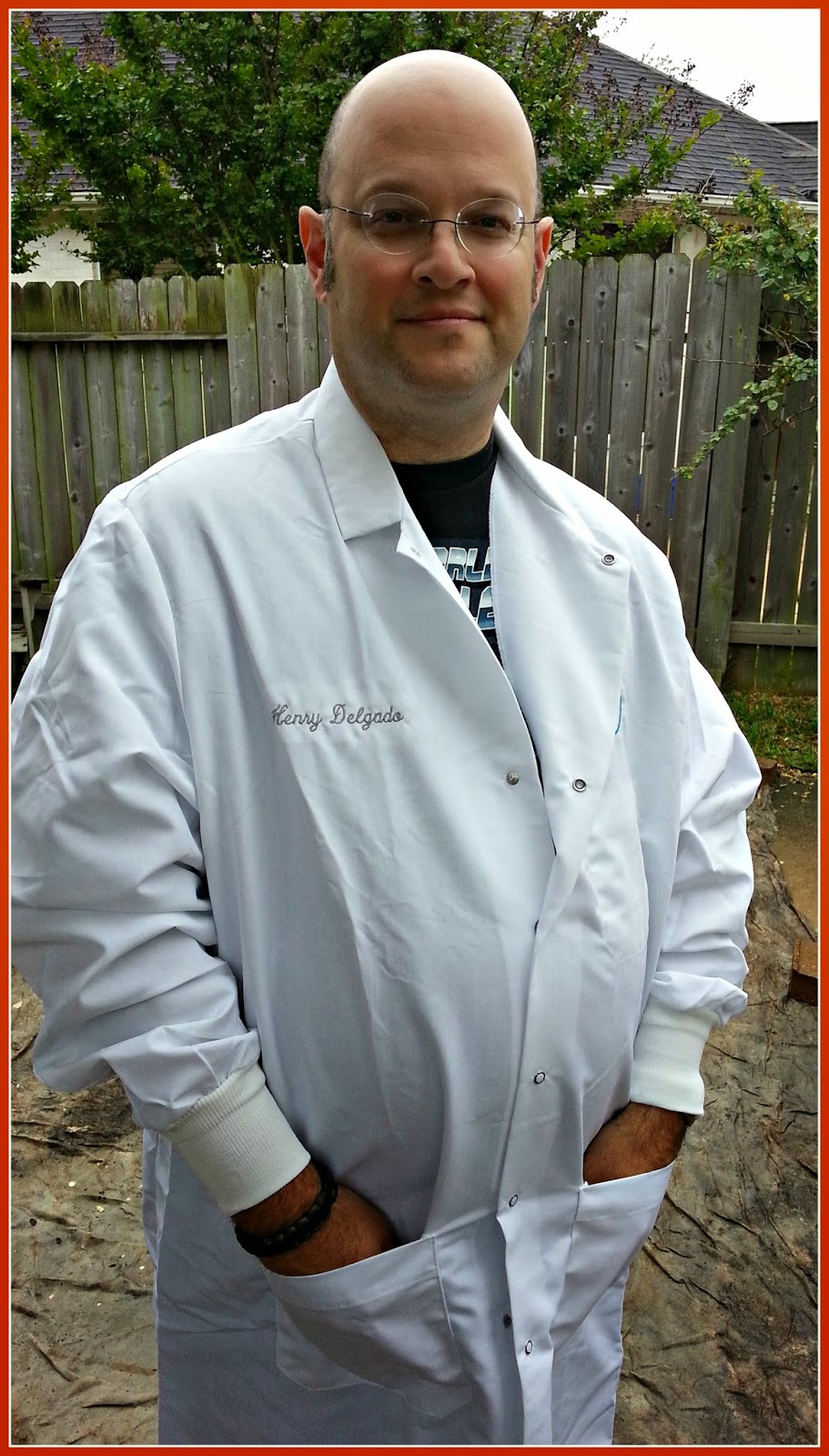 Henry has a degree in Biology and was a Biology TA in college for a million years (okay not that long). He has led countless students through dissections of more specimens than I want to think about. The point is, he knows his way around a scalpel! So he set up a table outside and gave Therese an eyeball and took one for himself. Everyone else gathered around...

Following Aurora's precise directions, Therese began to dissect her eyeball -- er, the cow's eyeball. We were all amazed to see the various features revealed and to have Henry point out to us the similarities between the cow's eye and our own, especially when we got to the lens and he told us that people can now get new lenses in their own eyes! 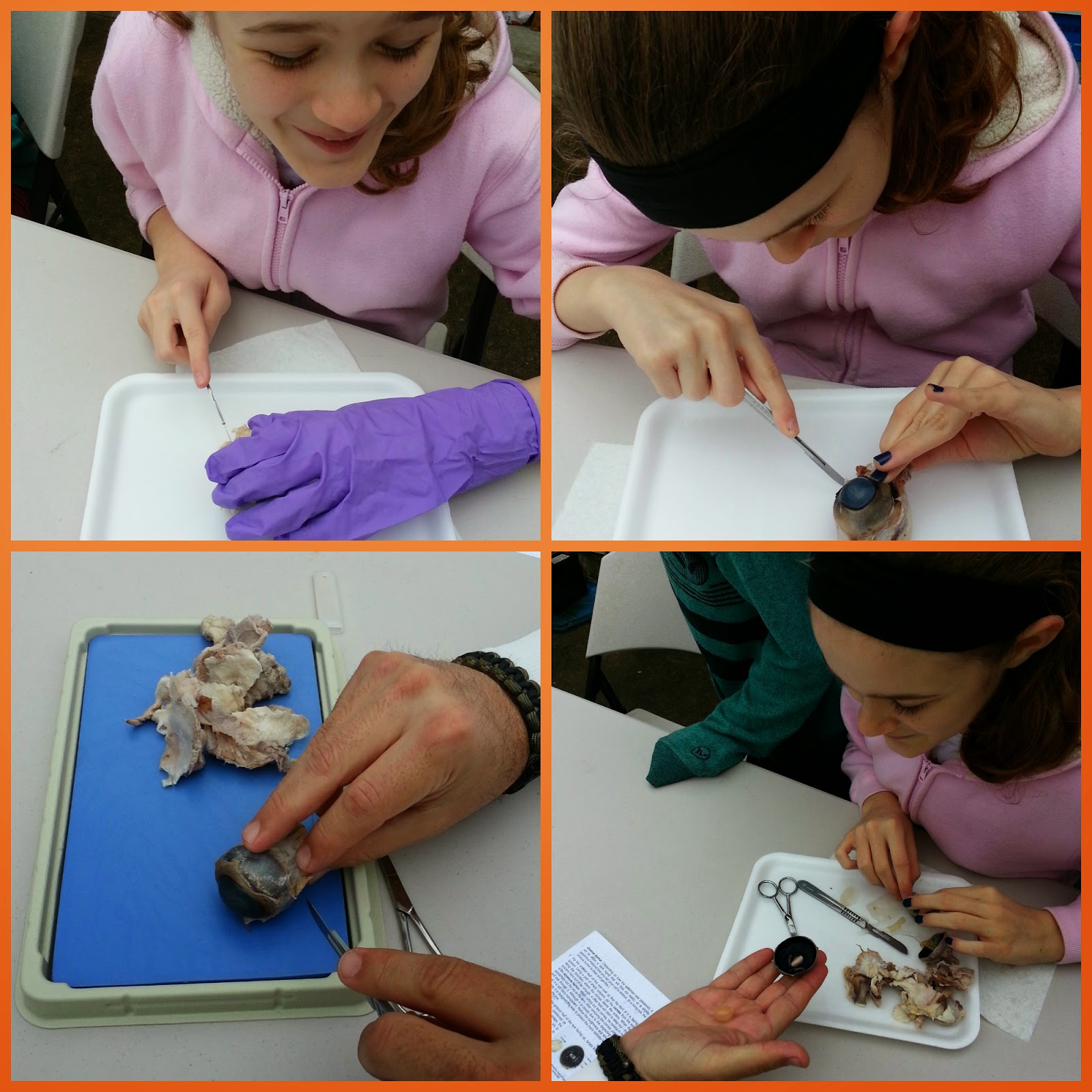 The kids (especially Therese) started out very hesitant about doing this dissection, but they ended up quite enthusiastic! Therese went from not wanting to touch the eyeball to doing what you see above in the video. I know that part of that is because Henry is a very patient teacher, but part of it is because Aurora is so enthusiastic about science. Unlike most of the experiments on e-Science, there is no video of Aurora doing this one - just step-by-step written directions. However, there are hundreds upon hundreds of other videos featuring Aurora and her enthusiasm is just contagious!

If you have a high schooler, it really is worth it to have the extra levels. Aurora includes links to outside reading, advanced lab worksheets that correlate with the younger students' labs (great if you're trying to streamline science in your house!), and some very sophisticated higher-level work (particle physics, anyone?). I honestly believe that you cannot get a better value overall anywhere. If there is anyway you can fit it into your budget, I don't think you'll regret it.

The key with e-Science is - and I say this with all sincerity - you cannot allow yourself to get overwhelmed. You don't have to do it perfectly. You don't have to do units in order. You don't have to finish a whole unit before moving on to another. Will it yield the best benefit if you do? Probably. Will your kids suffer if you don't? Not at all. They will gain a love of science even if you jump around every day. They will begin to make connections that will surprise the heck out of you. I am (well, I'd like to say peripatetic, but I should call a spade a spade) completely ADHD when it comes to school and curriculum (thanks be to God for the Crew and our amazing vendors!!!), and e-Science works for us for that reason. I am actually so afraid of being without it that I have bought a bunch (six, I think) of Aurora's DVDs. I want my kids to love science; I am just really bad about sticking with a curriculum. With e-Science, I don't have to. That is the ultimate beauty of it. And when Aurora teaches my kids something, they remember it.

I am not the only Crew member raving about e-Science. To see lots of other reviews and lots of other experiments conducted, click the banner below!