Words of Wisdom from my Dad

My dad is the wisest person I know. I am so blessed that he regularly emails me (and my siblings) his thoughts on all manner of things. Last weekend, he sent me this:


"I had an insight while out praying today.  I was reflecting on the passion and imagining the terror of that ordeal that from start to finish probably lasted 18 hours and I realized that Christ was not afraid as we would be, not because he was God but because he trusted in God.  In other words fear is frequently about what is to come, but I am thinking that Christ lived in the moment which was in harmony with His Father.  In other words Christ had no need to look beyond the present because he trusted in His Father to provide for his every need.  In that sense Christ’s reference to the birds of the air makes a whole lot more sense.  The lesson is clear for all of us.  Stop worrying about the future.  Tomorrow is not guaranteed.  Live today and let God take care of tomorrow.  Mother often said that God takes care of his own."

The mother to whom my Dad refers is my grandmother, Mama Connie. I miss her so much! 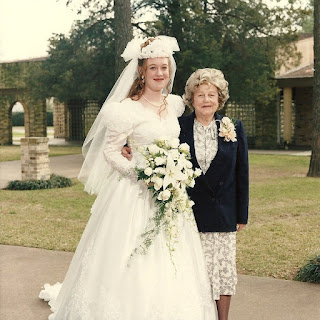 Side story - her luggage got lost, so the only thing she had to wear to my wedding was the dress she wore on the plane. She was so embarrassed. I think she looked beautiful.

...it's what I'm trying *not* to do. We've all heard that successful people don't waste time whining or complaining, right? It makes perfect sense. The same stuff you're complaining about is still going to be there when you're done complaining about it, so get over it and get it done. I've never had a problem with this in most aspects of my life. I never complained about a lot of schoolwork. I just did it. I never complain about a lot of housework. I just don't do it (truth in advertising, people, I'm all about it). When I had four children in less than 3.5 years, I didn't complain about the diapers or the lack of sleep (well, except a little self-indulgent venting to my husband, but that doesn't even count). I just did it. Those babies needed to be fed (constantly) and changed and played with and they were my responsibility. So why do I waste so much time bemoaning certain things that I can't change? Specifically, I accept all the nonsense in my own life and just deal with it, but when things happen in my kids' or husband's lives (things that I can't change and that they can't change), I somehow forget everything that I preach, teach, and believe and revert to a whiny "it's not fair" childlike state. It's not attractive.

Case in point: all this year, Henry's company has had his paycheck messed up. They have been taking out more than ten times what they should be taking out for flexible spending each check. Well, they finally fixed it and they will refund us our money -- all on one check and all lumped on to his regular paycheck. Which will kick us into a higher tax bracket. Which means we will lose a bunch of that money (*our* money that never should have been taken out to begin with) to taxes. Henry is very zen about it because he knows there is not a damn thing he can do about it. He realizes that we will just have to wait until a year from now when he does our taxes to get that money back in our tax refund (when the government realizes that no, we actually don't make what this one check will suggest). I can't get over it, though. I'm so incensed. And for what? I can't change it.

I need to put my money where my mouth is and get over it. Thank God we have enough in the bank to absorb the loss. Thank God we even *have* a paycheck. With benefits. I *know* we're blessed beyond anything we could ever deserve. And that knowledge just makes me resent myself and my pettiness even more (because it's not *fair*, don't you see?!). What a silly vicious circle!

So many times I ask myself WWHD (What Would Henry Do) because he is just so pragmatic about so many things. He is the serenity prayer in action. (I know it's What Would Jesus Do, but for me, aspiring to be like Henry is a tad more realistic most times than aspiring to be like Jesus - which, of course, is the ultimate goal.) 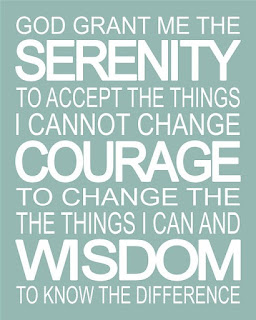 By Laura Delgado at February 22, 2017 No comments: Links to this post 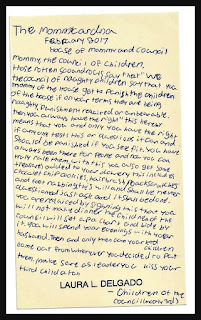 We have reached the Magna Carta in history. I didn't read all of it to the kids, but I did hit the highlights. Mary-Catherine (12) just presented me with this document...

House of Mommy and Council Mommy, the Council of Children, those rotten scoundrels, say that "we the council of naughty children say that you the Mommy of the House get to punish the children of the house if on your terms they are being naughty, punishment required or unbearable. Then you always have the right this hereby means that you and only you have the right if anyone tests this or questions it can and should be punished if you see fit. You have always been there for people and now you can truly rule them. With this you also get some treasures added to your dowery this includes chocalet chip cookies, hairbrush, backscratches, and foot rubbing. This will and shall never be questioned just ask and it shall be done. You are required by signing this that you will not make dinner the children of the council will set up a chart and abide by it. You will spend your evenings with your husband. Then and only then can your children come out from wherever you decide to put them. Make sure as leader you kiss your third child a ton. - Children of the Council (mostly 3rd)

By Laura Delgado at February 08, 2017 No comments: Links to this post

Maturity shows itself in a variety of ways, but most of all, I think, as grace under pressure. There are certain situations that bring out stress, and how one reacts to these situations shows a lot about how mature they are. In terms of teenagers, I think first born girls have a huge advantage, maturity-wise. It's a birth order thing. The ending of a relationship, whether it's a friendship or a relationship can reveal a lot about a person's true nature (or, at least, about their maturity level). That's true no matter how old one is. Winning and losing also reveal a lot about a person's maturity level, and they also present some of the very best opportunities for personal growth. Being a gracious loser can be difficult, but so can being a gracious winner. Mastering those skills is a lifelong battle for many because the stakes keep changing, as does the definition of winning and losing. So if you find yourself lacking a little grace under pressure, extend to yourself the same grace that you would to a friend. Resolve to do better next time. Most of us will get many more opportunities to get it right before all is said and done.
By Laura Delgado at February 07, 2017 No comments: Links to this post