You may think that you have not heard of USAopoly, but if you have ever seen, owned or played one of those awesome themed Monopoly, Trivial Pursuit, or Clue Games (I'm looking at you, fellow Whovians!), you've experienced one. What you may not know is that USAopoly also makes a ton of *other* great games whose names you may not know quite as well. We were lucky enough to get for review the super-fun games Tapple: Fast Word Fun for Everyone and Wonky: The Crazy Cubes Card Game. My kids absolutely loved both of them. 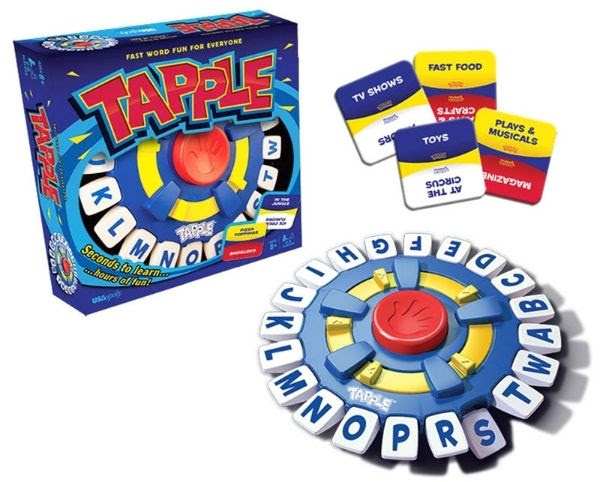 Tapple is a great game for word nerds, but it is also a game that all members of the family can play, as all members of the family know and remember different things. Let me explain. In Tapple, there is a deck of cards with two sides. One side has easier categories. The other side has more challenging categories. An example of an easier category is ice cream flavors. A more challenging category is cartoons. When the category is announced, play proceeds and each player in turn has to name something in that category that begins with a letter of the alphabet (one that hasn't yet been used). He pushes down the letter he uses and play passes to his left. The catch is (because of course there's a catch!) that he only has ten seconds in which to think of something! (That's what the red button in the middle is for.) The round is over when all of the letters have been pushed down or everyone's brains are exhausted. 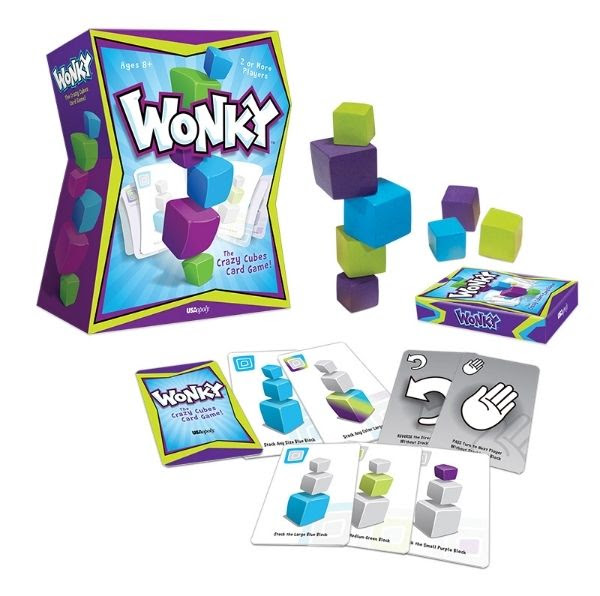 Wonky, while completely different from Tapple, is just as awesome. In Wonky, there are unevenly shaped blocks. The blocks have three curved sides and three even sides. Players play action cards that tell them how to stack the blocks. The person who knocks down the tower is out, and so on. Despite what you may think, you have never played a game like this before!

What My Kids Thought 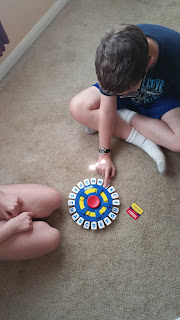 Right off the bat, my kids were ecstatic when they got these games. With all of the hundreds of games we have, we don't have any like these. While they reached for Wonky first, they reach for Tapple most often, so I'll talk about it first. Tapple is just awesome. The combined components of the idea of categories, plus being able to hit the timer and push down the letter make for a super-fun game. While it's tempting to think that older kids/grownups might have the advantage here, they in no way do. It is pretty much a completely level playing field. There are also ways to make it easier if it is still too hard or if you have littles who want to play. The easiest thing to do is simply to eliminate the timed aspect of the game. Also, you will literally never run out of replay potential on this game. When you have played through all the cards, play through them again. Better yet, make up your own cards! You can make them specific to your own family's experiences if you like. For our Catholic family, making a card for "Saints" is a no-brainer. Tapple is one of those games that you have to play to see how fun it is. I can't recommend it highly enough! 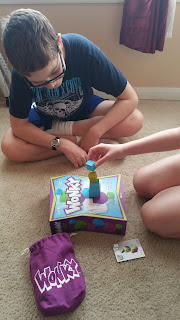 Wonky is not exactly my cup of tea because I get stressed about games like this, but my younger kids really like it a lot. If you like steady-hands games and enjoy recreating patterns, you'll love this one. My favorite thing about this game is its incredibly high quality. The box is made from such thick and wonderful cardboard that you won't believe it. Unless you're a mom whose kids have split the corners of all of your games' boxes, that will sound crazy, but if you know what I'm talking about, you'll get it. Wonky is super well-made. The blocks are smooth wood and so pretty. They beg you to play with them...and my kids obliged!

I warn you that when you go to the USAopoly website, you will get lost on it (lost in time, that is). They have so many truly wonderful games. I own several already - and I didn't even know that they were USAopoly until this review! There are several more that I plan to get for Christmas this year. I am betting you'll find a couple, too. Maybe Tapple or Wonky will make it on to your list. To see if other Crew members loved these games as much as we did (and how could they not?) click the banner below.