My 20th wedding anniversary is on 2/9/16. Everyone knows that I got married the day after my 21st birthday. That was kind of handy since I honeymooned in Las Vegas - would have been awkward not to be able to drink and gamble with my husband ('cause I'm all about the drinking and gambling).

I celebrated another anniversary of sorts last week. It was a year ago that my friendship with the best friend I ever had ended. We were friends for more than a quarter of a century. There was no big blowup or anything (if we ever fought, it was only because I was petty and bitchy in high school) - just a decision that our friendship had run its course.

My wedding day is one of the happiest of my life (naturally). The day that my best friend exited my life is one of my saddest. I observe both anniversaries. One I look forward to all year. The other I dreaded all year (I just observed the first anniversary).

What's my point? Stupid Facebook, with its asinine habit of doing the wrong thing at the wrong time, decided to "celebrate" the anniversary (there's that word again!) of my FB friendship with my friend's sister by showing me this picture - a picture which just happens to conflate everything! 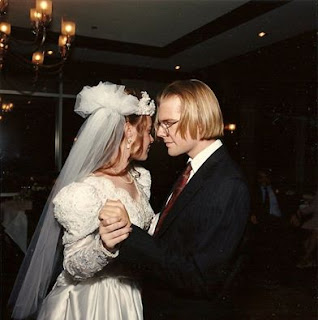 Thanks, Facebook. You really are the gift that keeps on giving.